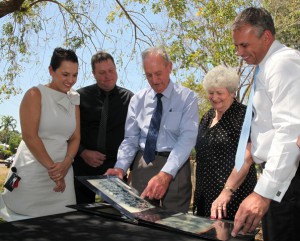 The grandson of the Territory’s only Victoria Cross recipient will help re-enact the war hero’s historic journey to enlist, as part of next year’s ANZAC Centenary commemorations.

“Albert Borella was a remarkable Territorian who undertook an inspiring journey to join combat in World War I,” Chief Minister Adam Giles said.

“We are thrilled that his family has agreed to be part of recreating his story and sharing it with a new generation of Territorians so that it is never forgotten.”

Albert Borella walked, swam through flooded rivers, rode horses and eventually travelled on a mail coach and a train to Darwin. Unable to sign on there, he was taken by ship to Queensland, and then went on to Western Australia for training. He served at Gallipoli and was then transferred to the action of the Western Front.

Borella received the distinctions of Mention in Despatches and the Military Medal for his services in action. Wounded, he was commissioned in the field and then received the highest honour for bravery in military service, the Victoria Cross.

“Richard Borella will be involved in the re-enactment as a Borella Rider, retracing his grandfather’s footsteps through the Outback from Tennant Creek to Darwin in 1915 so that he could enlist,” Parliamentary Secretary Lia Finocchiaro said.

Richard Borella never really knew his famous Grandfather but he has been aware of his famous reputation since he was a youngster. The penny dropped when he was eight and a plaque was unveiled in his Grandfather’s honour on Borella Road, in Albury.

“I began to realize then that a Victoria Cross was not a common decoration, that Pa was something a bit more than those who had done their bit for the country. I regarded him with awe. It was hard to believe what he did in World War I,” Richard Borella said.

The father of four has had both motorbikes and horses in his past, and two his daughters still ride today. They’re skills that will be essential next year when the Borella Ride is progressing up the Stuart Highway.

“I wanted to try to understand what he went through, and why he would have done it. Was it from a sense of duty? To serve his country? I guess I’ll be reflecting on that on the Ride up the Track,” Richard Borella said.

Albert Borella’s son, Rowan, is also in Darwin with his family this week helping to plan for the ride next year.

“The Borella Ride is highlighting for me the terrific sacrifice those men of World War I made to sign up,” he said.

The Borella Ride will be the Northern Territory’s flagship centenary activity. It will be held in February and March next year, giving roadside spectators, tourists, schools and communities an insight into Albert Borella’s life.

It has been generously funded through the Federal Government’s Anzac Centenary Public fund.

In May this year, the Territory Government announced a wider program of events to help community groups commemorate the Anzac Centenary and Centenary of Service.

To find out more about the ANZAC Centenary events please visit: www.dcm.nt.gov.au/anzac_centenary

A selection of images of Albert Borella is available for download at: http://is.gd/eoQqFo